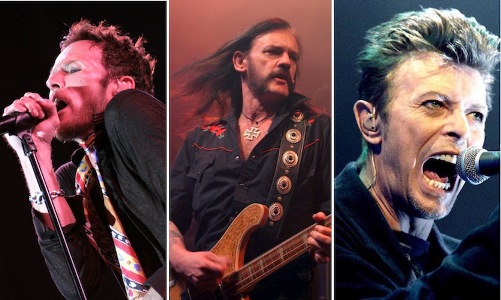 They say these things come in threes. This may be one of the more brutal threes I can remember. First, it was Scott Weiland. Then, we Lemmy’s shocking passing. Finally, David Bowie’s death blindsided us. It was a rough five weeks in the rock music world.

Sadly, many of rock music’s big players aren’t going to be around much longer…at least on a concert stage. We’ve got two Beatles left that are in their 70’s. Most of the Rolling Stones are in their 70’s (Ronnie Wood is still a spry 68!).  The big 70’s bands like Led Zeppelin, KISS and Aerosmith are in their mid to late 60’s. Bands like Black Sabbath, Rush, and Motley Crue have finished their final tours. Reunions notwithstanding.

So who’s going to carry the torch for the next generation? Who are the current major bands that we will call classic at some point? Unfortunately, there aren’t many options. The shortlist is Foo Fighters. I’d add Metallica to that list, but they’re even closer to already being classic rock.

There aren’t many new bands that have the potential to be around for 20 years or more. The music business doesn’t support a band like it used to. It’s hard for bands to break out and even harder to sustain any momentum.

That said, there is a new trend that may be gaining some steam – rock band franchising. Eddie Trunk has been talking about this for a little while now. What does that mean in the rock world? It’s when bands license their name to new players to tour, and in some cases even create new music. Sound farfetched? It’s already happening with at least two bands and on the verge with another.

One of the reasons it works for Foreigner is that the music was always bigger than band members. While Foreigner has a bunch of hits, you’d be hard-pressed to name more than two members of the band. That is likely the recipe for success:

My opinion is that these are the same as a tribute band, even with the original members’ endorsements. Are people going to shell out hard-earned cash to see the bands they used to love with all new members? Like most fads, it’ll work well for a few (like Foreigner) and then tons of bands will follow with decreasing success.

Do you want to see an Aerosmith without Steven Tyler or Joe Perry? How about the Rolling Stones without Mick Jagger or Keith Richards? Yes, the songs are what made the bands great. But the mystique of the bands playing those songs is what made the experiences great. You can only fake that for so long.

Let me know what you think of rock band franchising. Does it interest you? What new rock bands should we check out? Tell us in the comments below.