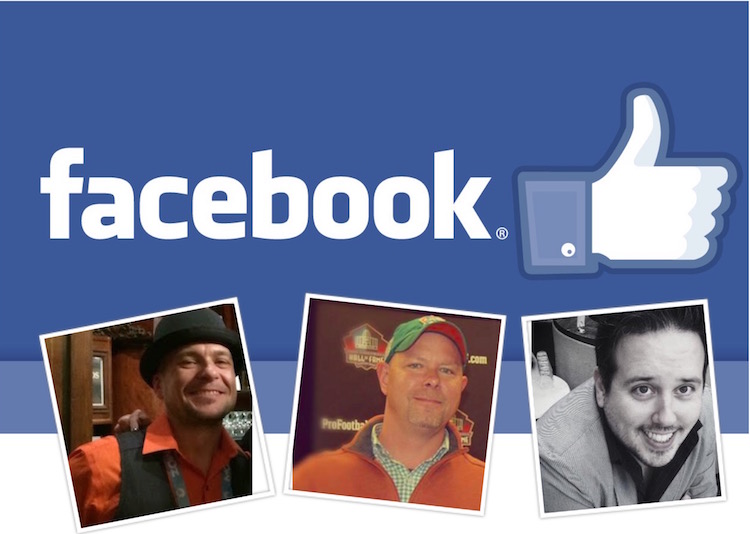 If you’re like me, you spend a lot of time on social media…especially Facebook. Facebook isn’t my favorite platform, but it’s what the majority of my friends and family use. So, I end up spending most of my social media time there too, even if I don’t love Facebook.

Among the random posts of vacation photos, food/drink pics, random thoughts on random issues, promotion of people’s latest projects (and I’m including myself in all the above), there are some posts that I go out of my way to find. These posts stand out to me because they share my friends’ passions, and show off their creativity and artistry.

Here are three content examples I look forward to most and why I still love Facebook. No surprise, these are three creative artists.

I can tell you the first reason I love Facebook with a quick story. Every Friday morning as I’m getting ready for work, I’ll check Facebook around 6am. Along with the usual mix of random morning posts, there’s one, in particular, I look forward to. It’s from Joe Kalinowski, creative director for Content Marketing Institute. His weekly Man Cave messages offer short, inspirational stories based on a word or phrase he chooses.

How did the Man Cave idea come about?

About 5 years ago, I was having a particularly rough day. The stars weren’t aligning for me between work, home and the general business of the day. I walked away from my screen for a few minutes, put in my headphones, and the song Soulshine by Gov’t Mule came on. The right song at the right moment put everything into perspective for me and the day got better. I wanted to share with my friends the inspiration that I found that day. So, I jotted the word “Soul Shine” on a half sheet of paper and took a picture of myself at my desk holding it. The little bit of self-expression felt good, so I followed it up the next week. This time with a few sentences about the word I wrote on my handheld sign.

Where did the name “Man Cave” come from?

My basement doubles as my hangout and my office. It is the landing spot for a ridiculous amount of mementos, sports memorabilia, Star Wars toys, and pretty much anything else my better half will not let me proudly display in the confines of the upstairs portion of our home. I am the proud father of two young ladies. So, being that my basement is where I hangout the majority of my day, it seemed only fitting that it was deemed “The Man Cave” by the family.

How do you choose your topic each week?

It is so incredibly random. I get a lot of ideas from what’s happening in the world of social media. I also base a lot of my topics around personal events and experiences. A good portion of the folks who see my post are right around my age – children of the ’70s and ’80s. So, I receive a lot of feedback when I do the good old nostalgia posts!

If you’re struggling for a topic, where do you go for inspiration?

My family is a huge source of inspiration for me. If I am struggling, I go back to the basics where it all started. I disconnect for a while, put in the headphones (maybe go for a jog around the ‘hood), and let the mind wander.

What motivates you to keep it running each week?

I was pondering about keeping it going, and one Friday I didn’t post one. Within a few minutes of my normal “post-time”, I received a few messages and emails asking where my Friday post was. That was and still is my motivation. I am unbelievably honored that so many of my friends and family look forward to my silly little ramblings and I thoroughly enjoy the conversations that they get going.

The second reason I love Facebook involves a friend and an acoustic guitar. Sometimes, I’ll be on Facebook on a Friday night, and I’ll see the post from my buddy, Chuck Greinert (web developer/designer for MetroHealth), asking for requests. He makes videos of himself playing the requests on an acoustic guitar. The first time I saw it, he impressed me by how good he is on the guitar. I’d only seen him play drums before that (and he’s an awesome drummer). It’s a fun way to watch a mini acoustic concert with a mix of 70’s-80’s rock with some newer stuff mixed in too.  I’ll usually check back on the following Saturday mornings to see if there were any songs that I missed.

The idea is a reminder to people that I play the guitar. I’m predominantly known as a drummer. I’m putting together a patio/bar act that I can supply in 3 different formats (instrumental, guitar + vocals, and guitar + vocals + my homegrown backing tracks). It’s a good “reminder” to people that I am still doing something musical with more to come.

What made you ask for requests?

I know a hundred million songs, but sometimes I get in a rut and wind up playing the same 20 – 30 songs all the time. So asking for requests jogs my memory on the songs I’ve forgotten. Either that or I wind up trying something new and maybe it sounds good enough to polish and put in the set. It’s also a fun, interactive way to get people’s interest when they are feeling a part of it.

When you get a request, what’s your process?

The recording process is one-take, but I go over the song a couple of times, find my key, familiarize myself with the piece, then record…because a lot of requests are songs that I may have never tried before.

Ever consider any live playing on an app like Google Hangouts?

I have considered doing something “live.” But, the request portion would be difficult because it would be me noodling around for 10 minutes to show something for like three minutes. But, I have used LiveStream for my old band (Fabulous Disaster) to broadcast portions of our band practices.

What are your favorite songs to play?

I’m not a fantastic guitarist or an over-the-top singer (as you well know). But my strength comes in combining those two facets to where it turns into performance. My favorite songs to play acoustically are Photograph by Def Leppard, Let It Be by The Beatles and Are You Gonna Be My Girl? by Jet. I’m also working on a Hendrix mash-up of Little Wing, Hey Joe and Purple Haze.

Anyone who knows me knows that I’m a big rock music guy. I love going to concerts. I also like to mix in some rock music comparisons with the marketing I do. This is what instantly drew me to Jason Miller, senior manager of content marketing at LinkedIn and author of Welcome to the Funnel: Proven Tactics to Turn Your Social Media and Content Marketing Up to 11 (see my review here). He worked for Sony Music earlier in his career and is well known for infusing rock references into his content.

I was following him for his marketing insights when I found the third reason I love Facebook: his concert photos. I then realized that they were photos he had taken. These were incredible photos too (see the samples above that happen to be my favorites)! You can see all of his photos at www.rocknrollcocktail.com.

My favorite story about his photography was from a couple of months ago. He was shooting Hall and Oates when right before the show, they added a few seats for a VIP. The VIP turned out to be none other than Sammy Hagar!

How did you get interested in photography and shooting concerts?

That’s a good question. I’ve actually never been interested in photography at all, to be honest. I was writing for a music blog purely for fun and to keep my connection to the music biz. Motley Crue’s publicist reached out to me asking if I was interested in reviewing the show here in San Francisco back in 2012. I said “of course” and he mentioned he would leave a photo pass for me and that I could photograph the first three songs of the band’s set. I had never picked up a camera in my life, but that night I went out and bought a Nikon and stayed up trying to figure out how to use it. My photos turned out so bad and I was so upset that I screwed up such a cool opportunity with one of my all-time favorite bands, that I vowed to master low light photography. Several hundred shows later, I think I figured it out.

Which has been your favorite?

There have been so many. I’ve been VERY fortunate to photograph some legends as well as some incredible new bands. If I had to pick my favorite shoots, one would certainly be KISS. Other than that, Lamb of God, Cheap Trick, Roger Waters, AC/DC, Faith No More, Foo Fighters, Courtney Love, I could go on for a while, but those are my top favorites.

Any bands you’re dying to shoot that you haven’t yet?

Yes! There are a few. Muse, The Who, Motorhead, Metallica, Spoon, and I think I would like to photograph a European Metal festival at some point. Maybe next year.

I’ve heard you mention a book coming out of your photography. What’s the status on that?

The book is called Down in Front: A Story from the Back of the Crowd to the Front of the Stage. It’s been in the works for about a year now as I’ve shot over one million photos, I’ve had to narrow them down to less than a hundred of my favorites. I’m trying to tell a bit of a story with them as well. I’m looking at releasing it in January or February.

While I’m impressed by these posts and the abilities of these three, I’m happy to call them friends as well. Thanks for your posts and please keep it coming! Because even if I don’t love Facebook, I do love these posts.